History of the Tasmanian Gourmet Kitchen

At the end of 2004, my husband Bill, myself and our two young children, Oscara not quite 2 and Max 8 months, decided to leave our home and life in Sydney and head out on the road in a caravan. Our quest – to find a place where we could afford to bring up our children in a family focused, carefree environment.

So early in March 2005 with the car loaded up and pulling a 1983 24 foot Viscount caravan we headed out on to the roads of NSW. We had no real plan and no time frame – we just felt that we would know when we found the place. The adventure started in Eden , on the southern border of NSW and took us up the coast as far as Airlie Beach in Queensland . We definitely found places that had potential but we felt that there was always something missing.

What that was did not dawn on me until I was lying in a hospital bed recovering from a thyroid operation. With some time to myself to think, I came to the conclusion that the ‘missing thing’ was family – and being close to loved ones.

With this as our new goal we made plans to head back to Tasmania , where Bill was brought up, and where most of his close family still lives. So at the end of October 2005 we said a sad good bye to Vinnie-the-Viscount and moved all our worldly goods to Longford, and a small rented cottage on the edge of town.

Part of our reason for leaving Sydney was that we wanted to have our own business so that we could spend as much time as possible with our children, and also wanted to have the flexibility that ‘being your own boss’ brings.

With this in mind and with our catering and restaurant background, Tasmanian Gourmet Kitchen was born. 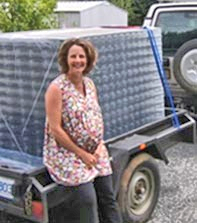 Our first foray into ‘retail’ was at the Evandale Market; a country market held every Sunday in the small village of Evandale in the Northern Midlands region of Tasmania . We worked through the night bottling, baking and labeling for our first market at the end of November and set up a stall on a warm and sunny Sunday morning. We continued to juggle production, selling and raising two toddlers most Sundays until, at the end of January and with a new baby due in March, we decided to concentrate on the savoury marmalades and chutneys and to start bottling for the stock room.

We had decided early on that we wanted TGK to support local Tassie growers wherever possible. So, to this end, Bill headed out to find the raw materials that we needed for our products; namely capsicums and beetroot. Thanks to a lead from Bill’s Aunt Libby we found Rob and Anne Henderson who began supplying us with wonderful red and yellow capsicum peppers. Further research led Bill to a grower of organic beetroot in the north west of the State.

The first year of business, saw Bill working hard at balancing the production side while finding the time to get out there to sell the product. We were very fortunate that our great friend Tori was prepared to be our agent in Sydney and we started getting enquiries from interstate. Any spare moment was spent looking at the best way to tackle PR, transport and marketing, whilst juggling 2 toddlers and a new baby. Never a dull moment! The story is still developing as I type. TGK has grown nearly as quickly as the kids and we have recently moved into new premises in Longford – a purpose built production facility. We have stockists in all corners of the State and the mainland and have recently gained our first overseas stockist in Singapore.

The chutneys and savoury marmalades continue to win awards and we are encouraged by the wonderful responses we receive from people when they taste them. We hope that you enjoy our products and thank you for giving them a try.